To start off, the VA/DC/MD sectionals was a great experience, both for myself and the four guys from CrossFit RVA who competed. The event was much larger than I anticipated, with a total of 250+ people competing. The event was well-run; scores were updated quickly on the games site, heats started when they were supposed to, and things stayed well organized. Our guys worked hard, but with the impressive pool of CrossFitters, weren’t able to crack the top 20. 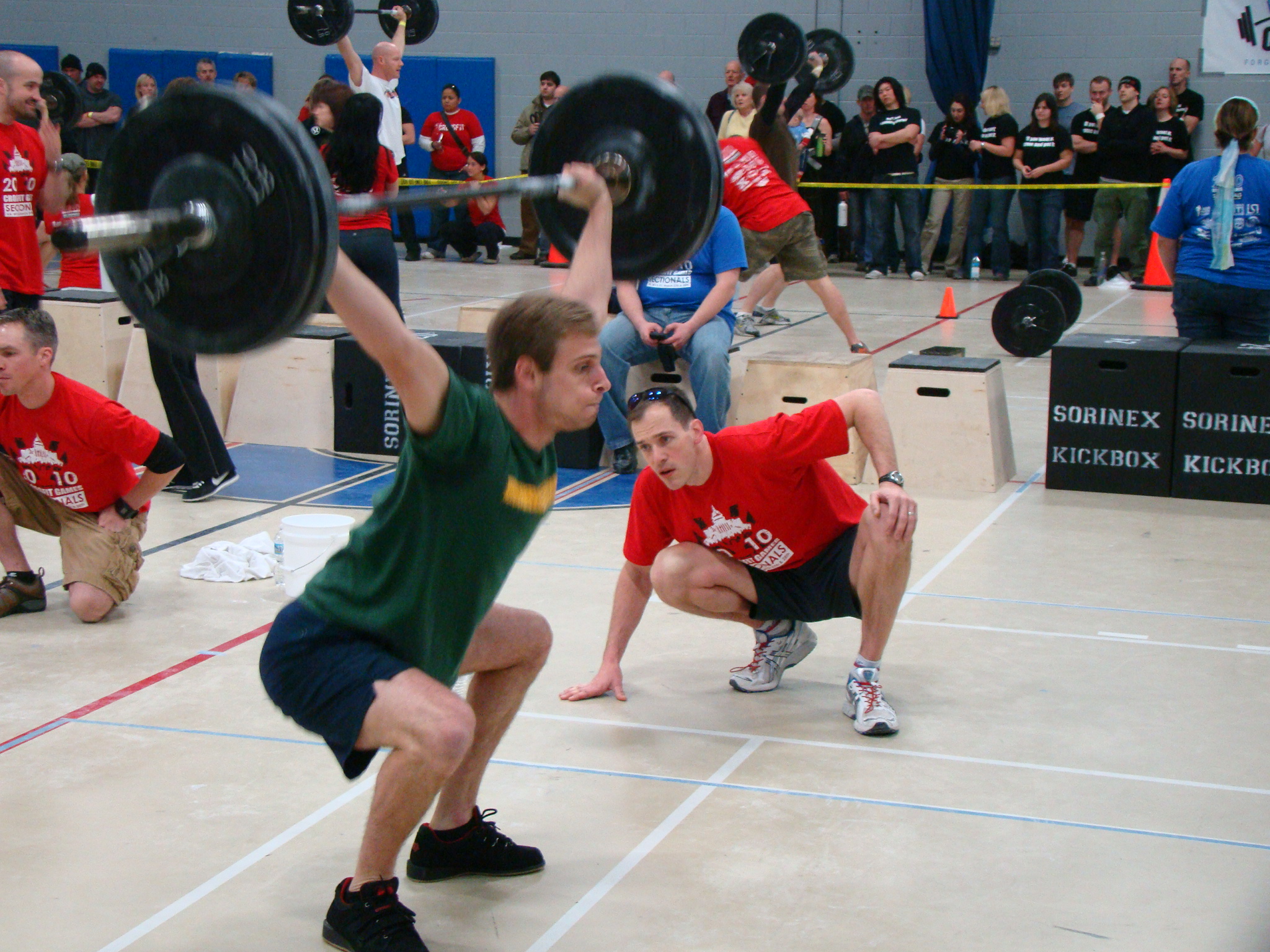 Kat and I showed up with time to spare, despite the long lines, and an unfortunate purchase of Einstein Bros.
coffee. Don’t ever buy their coffee, it tastes weird. Also, I thought the long lines was for the Sectionals, but it was actually for a “paper shredding event” taking place on campus. I had no idea there was such a thing as a paper shredding event, but there is, and got into their line on accident, and it took an extra 30 minutes to get parked.

The first event of the day was Cindy with a 20# weight vest for guys, and 14# for girls. Throughout the weekend, the order of heats was Mark, Brian, Dave S, and John. The standards were clear for the movements, but unfortunately variable. Mark started out with a tough judge, getting called on many of his pull-ups, which despite being chest to bar, his chin wasn’t clearly in front of the bar. Despite the pull-up challenges, the tough part for our guys was the push-ups. Even with the weight vests cutting some of the ROM, they ended up being the limiting factor. John pulled out the best score for our group, with just over 15 rounds completed.

The second event, as many reps of Clean and Jerks with 185# in 3 minutes, was one we were excited to see. For most of our guys, 185# isn’t much to put overhead, and the timeframe was short. The standards were again, quite clear, especially on the jerk with the bar needing to be caught overhead with locked elbows (no press-outs). Dave wound up with 11 here, leading our group with a consistent performance. Many people were getting called for the press-outs, and even in the sport of Olympic weightlifting, with 3 judges per person, this is a hard call to make!

For the third event of the games, and the first of Day 2, we started with AMRAP 12, 20OHS, 200M Run. This workout required good flexibility and balance. Many competitors had issues keeping the bar overhead for more than a few reps, or getting full squat depth. Brian did well on this workout with his impressive flexibility in the squat. We also got to watch Sasha from CrossFit Chespeake pull out a big W for the workout, with 6 full rounds, entirely unbroken.

The final event was some Crossfit bread and butter – a hard hitting couplet, requiring more determination than anything else. AMRAP 7, 12 box jumps, 8 SDLHPs, this would leave many competitors curled up in the fetal position afterward. Mark and John made this their trademark move of the weekend. John led our group here, wrapping up a long weekend.

The sectionals were an incredible experience. I have a renewed respect for capabilities of the top performers, and the group as a whole. The ability of the top guys to perform well in all events was a testament to what it takes to become a good CrossFitter.

The standards being held were extremely strict, and for some, incredibly well-enforced. We don’t count reps, and don’t often call missed reps. Seeing the consistency for some – ALWAYS getting their hips through at the top of a squat, ALWAYS getting deep enough, ALWAYS catching their jerks without pressouts, was enough to make me realize that our standards will never be too strict. We’ll never be able to enforce standards as strict as they were at sectionals (sadly, we don’t have a 1-1 member/judge ratio), but we will continue to lay the foundations of better, more precise movement.

We’ve got a lot of work to do before next year. I hope to see many more of your out there, and I’d love to get a few of you qualifying for regionals!

On the Weird/Awesome continuum, it fell right within the coveted “sweet spot”.

Want to find out more?

Send us your information through the form below, and we’ll setup a free one on one session with you.  We’ll talk about your goals, what you’re looking for, and take you through a free workout (if you’d like!)